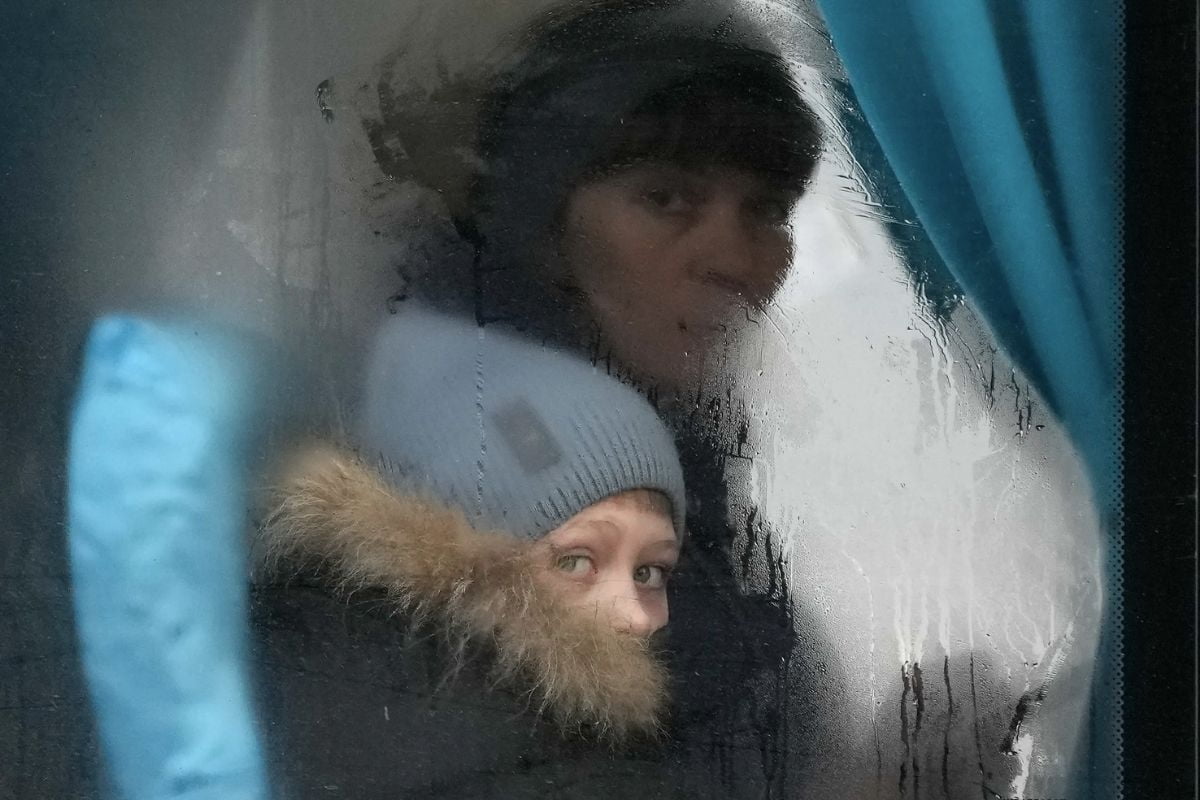 Following weeks of warnings of “severe” sanctions if Russia invaded Ukraine, President Joe Biden delivered a speech to the nation and the world from the White House on Thursday, in what is shaping up to be a watershed moment in his presidency as President Vladimir Putin continues his massive assault.

“The Russian military has begun a brutal assault on Ukraine without provocation, without justification, without necessity,” Biden said, taking a firm tone. “This is a premeditated attack.”

“For weeks, for weeks we have been warning that this would happen, and now, it’s unfolding largely as we predicted,” he continued.

“Putin is the aggressor. Putin chose this war. And now he and his country will bear the consequences,” Biden said. “Today, I am authorizing additional strong sanctions and new limitations on what can be exported to Russia. This is going to impose severe costs on the Russian economy, both immediately and over time.”

Biden said the US was implementing sanctions on four additional significant banks, meaning “every asset they have in America would be frozen,” and that the list of Russian elites and family members sanctioned by the US will be expanded.

“Between our actions and those of our allies and partners, we estimate that we’ll cut off more than half of Russia’s high-tech imports. We’ll strike a blow to their ability to continue to modernize their military. It will degrade their aerospace industry, including their space program. It will hurt their ability to build ships, reducing their ability to compete economically. And it will be a major hit to Putin’s long-term strategic ambitions,” Biden said.

But it’s unclear whether the penalties will have any impact on what Putin described as a “special military operation” in eastern Ukraine overnight, which has turned out to be far more extensive.

“To anyone who would consider interfering from the outside, if you do, you will face consequences greater than any you have faced in history,” Putin warned the world.

While it was unknown how far Putin would go beyond eastern Ukraine, Russian soldiers invaded close Kyiv, reigniting worries that he might try to destabilize the Ukrainian government.

Biden has insisted that US soldiers will not fight Russians on the ground, but he just stated that he has authorized extra US forces to deploy to Germany as part of NATO’s reaction force, including the 8,500 troops who were placed on “heightened alert” last month.

“Our forces are not going to Europe to fight in Ukraine but to defend our NATO allies and reassure those allies in the East. As I made crystal clear, the United States will defend every inch of NATO territory with the full force of American power,” Biden said.

“I’ve also spoken with Defense Secretary Austin and Chairman of Joint Chiefs General Milly about preparations for additional moves, should they become necessary, to protect our NATO allies and support the greatest military alliance in the history of the world — NATO,” he added later on.

The Biden administration had threatened to impose additional sanctions on major Russian financial institutions and banks, as well as steps to limit Russian access to technology, cut Russia off from SWIFT (Society for Worldwide Interbank Financial Telecommunication), which would limit Russia’s ability to participate in global markets, and directly sanction Putin’s inner circle, including the Russian president himself.

Late last month, Biden told reporters that if Russia invaded Ukraine, he would consider personally sanctioning Putin, a day after 8,500 American troops were deployed to the region on “heightened alert.” However, neither those efforts nor economic sanctions imposed this week by the US and its European allies, including the suspension of the certification of Nord Stream 2, a major natural gas pipeline connecting Russia and Germany, appeared to deter the Russian leader.

At a news conference in Kentucky before Biden’s speech, Senate Republican Leader Mitch McConnell called on the administration to “ratchet up the sanctions all the way up” on Russia.

He said that “we honestly don’t know” if sanctions would be enough to dissuade Putin, but insisted that further measures were still needed.

As Ukrainians awoke to a country at war on Thursday morning, Russian soldiers moved from three directions: from the south moving north, from Belarus marching south to Kyiv, and from the northeast of Ukraine heading south.

According to Biden’s comments, the United States should send soldiers to Ukraine

The Largest Conventional Fight in Europe Since Wwii, the Us Military Estimates

A senior defence source said Thursday that US intelligence believes these three axes were “intended to seize important population centres.”

The penalties will be “united and decisive,” according to the White House, but it’s unclear how the West would penalise Putin, who appears bent on carrying out his plans despite weeks of international diplomacy and a set of sanctions already in place.

Biden met with his National Security Council in the Situation Room early Thursday ahead of a virtual video conversation with G-7 leaders to negotiate a united response to Russia’s aggression on Ukraine, which the US has condemned as “unprovoked and unjustifiable.”

Russia was a member of the G-7 until it illegally annexed Crimea in 2014, and it is now creeping in on Ukrainian borders even further.

As the incident developed, Biden was at the White House.

Biden was on the phone with Ukrainian President Volodymyr Zelenskyy within minutes, after experiencing “silence” on a phone conversation with Putin. According to Zelenskyy’s office, Russia has two tactical aims in Ukraine: capturing land and removing Ukrainian government.

Following their conversation, Biden issued a statement in which he stated that Putin “has chosen a premeditated war that will bring a catastrophic loss of life and human suffering.”

“The prayers of the world are with the people of Ukraine tonight as they suffer an unprovoked and unjustified attack by Russian military forces,” Biden said.

The American president has conceded that the Russian invasion and associated sanctions would have “consequences at home,” notably at the gas pump and in energy prices, but has promised to alleviate those costs.

However, ahead of his Thursday statements, U.S. crude oil prices surpassed $100 per barrel, bringing average gasoline prices to $3.54 per gallon, according to the American Automobile Association. Gas rates in at least three states averaged $4 or more per gallon. Meanwhile, stock and dow futures in the United States plummeted.

Nonetheless, Biden has reminded Americans that the United States has a responsibility to defend its NATO partners as well as global democracy.