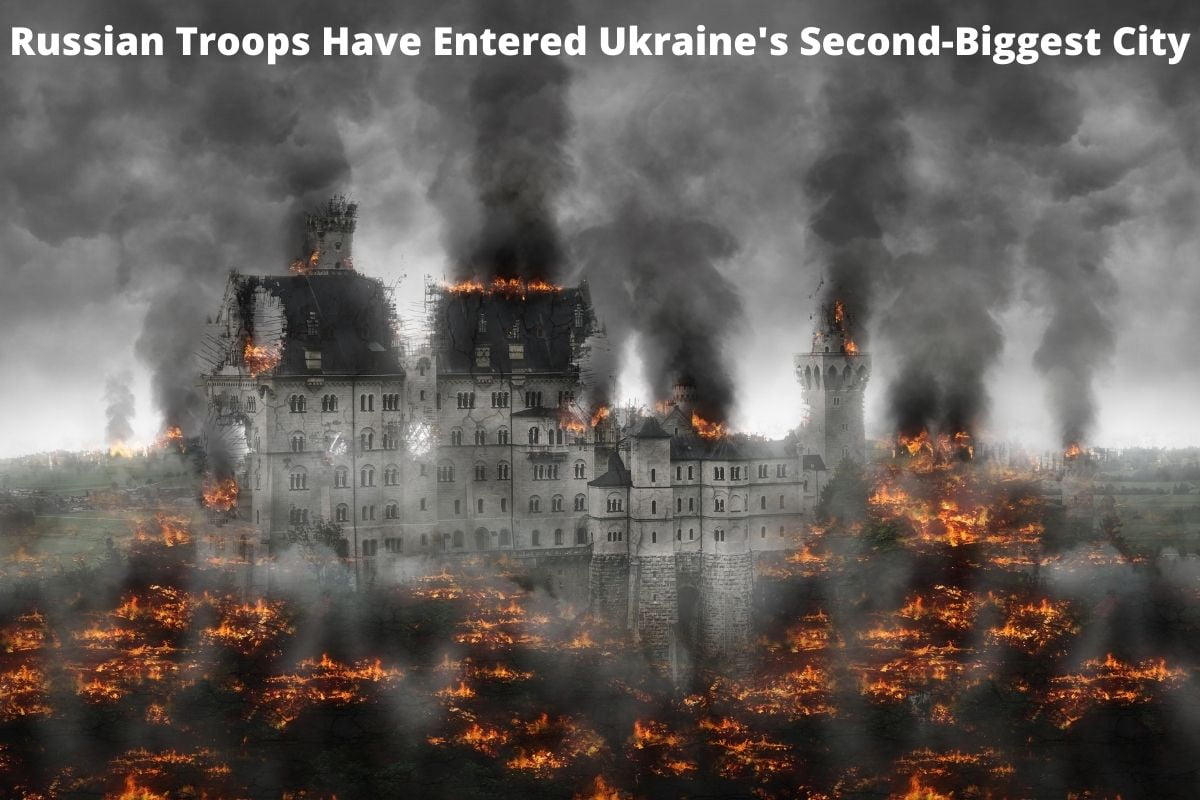 According to the Associated Press, Russian troops have entered Kharkiv, Ukraine’s second-largest city, and fighting has broken out.

Videos circulated in Ukrainian media and social media showing Russian vehicles driving through Kharkiv and a burning vehicle on the street. Staying indoors was strongly advised for everyone.

A few hours after Putin started a volley of attacks on Ukraine, the troops in Kharkiv arrived.

The area south of the capital was rocked by two massive explosions soon before 1 a.m. local time. It was reported that one incident occurred at Zhuliany Airport and the other at an oil depot some 25 miles south of the city. The mayor of Vasylkiv, via the AP, stated that both blasts occurred near Zhuliany Airport. According to Ukraine’s president’s administration, Russian forces also destroyed a gas pipeline in Kharkiv, the country’s second-largest city.

Since Russia’s invasion of Ukraine on Thursday, there have been at least 240 documented civilian casualties, including at least 64 deaths, according to the UN. Despite this, UN officials feel that the “actual statistics are much higher” because there are still many reports of casualties that have not been substantiated.

US and European allies have decided to withdraw “selected” Russian banks from the SWIFT messaging system, which facilitates the flow of financial transactions.

After that, Russia intends to use Ukrainian airfields.

With its airfields and fuel facilities under attack, Russia appeared to be moving forward with an invasion that has so far stalled due to determined Ukrainian opposition. As a response, the United States and the European Union provided arms and ammunition to the outnumbered Ukrainians, as well as a slew of punitive measures designed to isolate Russia.

There were massive explosions early Sunday morning south of Kyiv, where residents were huddling in their houses, garages, and subway stations in preparation for a Russian invasion.

The Russian military is nowhere to be found. Ukraine invasion ‘You can’t defeat an entire nation,’ said the narrator.

While Kyiv is rocked by explosions and Ukrainian forces are outgunned, Ukrainian writer Illarion Pavliuk plans to set out on a risky trek to help his people on Sunday morning.

Pavliuk is not a soldier, although he has a military education and experience.

He volunteered as a spy in the Eastern Ukraine conflict in 2015 and learned a lot. As a result, Ukraine has become a country in which internationally recognized artists are obliged to kiss their children goodnight before they leave to fight against the occupying troops. “We will never give up, and we are going to win this war. You can’t take down the entire country at once. Ukraine is now a united nation,” he said.

With his children playing in the background, his remarks are frightening and profound.

When it comes to this battle, what can I tell you? Saying a few words is difficult,” he admits. If cruise missiles were flying over our city, I couldn’t image my four children putting their toys down and heading for the thickest doorway in the home.”

We never expected this to happen, and we will never forgive Russia for what they have done.